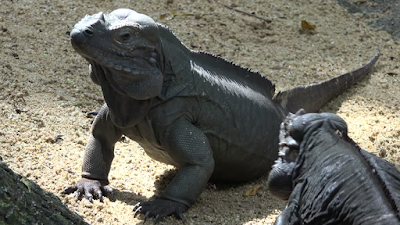 Facts about the Rhinoceros Iguana

The iguana family is one of the thirteen species of the lizard family. Usually they comprise the group of reptiles that belong to the largest species. The popular iguana species are commonly found in Mexico, southward to Brazil.

The common iguana is green with dark bands that form rings on tail. Similar to other reptile, iguanas are also egg-laying animal, cold-blooded with an exceptional ability to adjust to their environment. Species like iguanas vary on different colors, behaviors, sizes and their endangered condition in the wild.

Different kinds of iguanas vary in their looks and acts. You might not even recognize that they belong in the same family. Some iguanas are dull while the others have a vivid and bright color.

Iguanas are found in different habitats so each one has its own unique adaptation. Most of the iguanas are herbivores that eat flower buds, young leaves and fruits. Some of them also eat the rare juicy mealworm and wax worm.

The Origin of the Rhinoceros Iguana

This species got its name “rhinoceros” because of its horn-like shape that is found on the head of the male iguanas. They are found mostly on terrestrial like the rocky and dry areas. They are infrequently found in trees or in forested areas. Rhino Iguana is much heavier than common green iguana but it is not as long as the latter.

The species is composed of large reptiles, heavy-bodied lizard with a homogeneous gray body. The male has a three horn like protrusion on its head. The common rhino iguana has a total body length of 1.2m or 4.5ft long and weighs for about 10-20lbs or 4.5-9kg.

Rhino iguanas are omnivores, they eat a wide variety of vegetables as well as small mammals, birds and invertebrates. They lie for about 15-20 eggs and develop for approximately 75-100 days. Typically, rhino iguanas develop its sexual maturity when it reaches its second to third year of its birth. The most common rhino iguana lives up to 20 years or more and most of them dwell on dry rock areas and savannas.

Most of the male iguana experience complicated courtship behaviors of head bobbing and erecting the spines along the back. They normally quite timorous and will flee when approached, but during courtship rhino iguana males are aggressive. Female iguanas on the other hand have a horn-like shape but smaller than those in males. Female rhino iguanas mate with several male rhino iguanas and have the ability to hoard sperm.

Rhino iguanas are tremendously territorial and use their whip and long tails to rip off predators or intruders. The rhino species has ability to re-grow its teeth that were lost after a battle. Territorial battles of male iguanas seldom come to full aggression, the subsequent face off can last for several hours.

Due to its population, rhinoceros iguanas are particularly susceptible to environmental and man made disturbances. People in the islands often eat iguanas as food because of their accessibility and somewhat poor economic status in the island. Wide-scale release of iguanas in pet trades and zoos make them protected. There are also wildlife organizations that protect the species. Thus, they play an important role in the conservation of rhinoceros iguanas and other species.
Share on Facebook
Share on Twitter
Share on Google+
Tags : Iguana