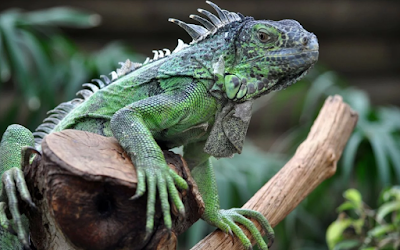 Types of Iguanas: Getting to know them

Iguanas basically belong to the lizard family called Iguanidae. Their most common characteristics include elongated tails, eyelids and four rambling legs. Like most reptiles all types of iguanas are cold blooded and can reach a life span of up to 20 years.

Iguanas are naturally found in Mexico and The Central and Southern part of the Americas and some are found in the Lesser Antilles Islands, Hawaii, Florida and California.

Most type of iguanas are arboreal which can be found on living on trees but some also inhabits the desserts, rocky terrains and even near sea side caves which are called the marine iguanas.

The Genus Cyrclura is also commonly known as the rock iguana which can be in most parts of the Caribbean Islands, these types of iguana are under the protection of endangered species so they are scarcely sold or traded but if ever you find one on a shop they are mostly captive bred.

These types of iguanas, the Genus Amblyrhyncus are known as the marine iguanas or the Galapagos Marine Iguana.

These types of iguana is the most hard to be reserved in confinement for the reason that they feed on a diet which is basically close to impossible to produce commercially which is the Marine Algae.

Genus Conolophus, these are the closest relatives of the marine iguana. This type of iguana is also called the Galapagos Land Iguana they basically feed on plants and cactus.

Genus Ctenosauria this are mainly called the spiny tailed iguanas and are native to Mexico and Central America. They are small compared to other iguanas because they can only grow from 5 inches up to 35 inches.

The most outstanding feature of this creature is the large scales on its tail. They are grouped as omnivores which basically feed on fruits and flowers as well as small insects.

Genus Dipsosaurus consists of the dessert iguanas of the Southern America and Mexico. This kind of iguanas is full-bodied with an apex of elevated and expanded scales on its back.

They have cream to white colored bellies and are spotted with white dots and stripe colored tails. They can grow up to 15 inches long with a tail that is as twice as long as its body.

Genus Sauromalus is also known as the Chuckwalla which is a robust herbaceous iguana commonly found in United States and Mexico. These types of iguanas are strict vegetarians they confine themselves with eating only fruits, leaves and flowers.

Chuckwallas have skins that hang loosely on its fat body; they love heat and do not basically moves in the morning until the heat reaches a hundred degrees.

To shove of the extra heat they either change color to reflect the suns heat or hide in the shade. Chuckwallas is also good for captivity as a pet cause they do not move that much.

Lastly the Genus Brachylophus or known as the Fijian banded Iguana which is found in the island of Fiji and Tonga.

Iguanas nowadays are coined as endangered species and illegal possession of any types of iguanas is punishable by law so be sure that if you want an iguana as a pet, have it registered first in a legal process and consult some veterinarians for some advices and guidelines in preparing to adopt an Iguana.
Share on Facebook
Share on Twitter
Share on Google+
Tags : Iguana